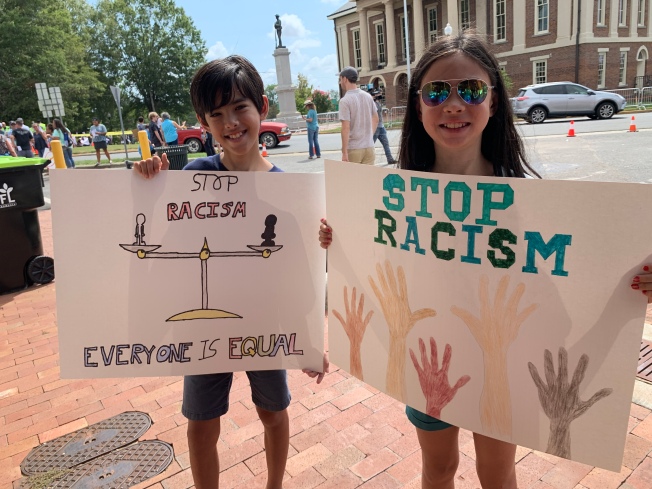 I was told the Ku Klux Klan might be coming to Pittsboro this morning to protest the taking down of the confederate statue.  The Chatham County Commissioners voted 4-1 to take the statue down last month.  The KKK is known as an American white supremacist hate group. It’s very disturbing to think that they would appear in our progressive county.  (For a long time, I didn’t think they were still a thing).  They did just show up in Hillsborough a few weeks ago.

We have been working on bringing whites and people of color together every month to learn more about white privilege.  LaShauna Austria is our force of nature leader and we call it the Chatham Social Justice Exchange.  Abundance NC and RAFI are partners.

“Fish don’t know they’re in water. If you tried to explain it, they’d say, “Water? What’s water?” They’re so surrounded by it that it’s impossible to see. They can’t see it until they jump outside of it.

This is how I feel about culture. We’re so surrounded by it that it’s impossible to see. Many things we think are true are really just our local culture. We can’t see it until we get outside of it.”  Derek Sivers

We white people don’t know what it’s like to feel oppressed, to fear for our lives, or anything about what it’s truly like to be a black person, a latino, or anyone outside of our white American culture.  And it’s not the job of others to educate us….we must do that for ourselves.

Today was truly inspiring and actually made me cry to hear the stories from my neighbors of color.  One very tall black man and I were buying coffees together.  We recognized each other from just being around town.  He told me about growing up in Moore County and driving through Pittsboro when he was younger.  Pittsboro had one stop light then and it was pretty dark and he would round the corner of the courthouse and there was the looming confederate statue.  This sweet man was scared driving through our town of Pittsboro.  I’ve never felt that fear.  I’m a privileged white woman that can do anything I want.  I can walk anywhere I want, go in any store without someone thinking I’m stealing something.  Little old ladies do not clutch their purses when I walk past them.

Today, Del Turner, Stephanie Perry and many others organized a counter protest to the group coming out.  The local police and sheriffs were out in force to make sure everyone was safe.  There was a lot of fear on the liberal side of the street.  I understand the fear because of all that has happened in our nation, but I think this needs folks to show up.  Let’s not manifest violence in little Pittsboro.  Let’s listen to each other.  Let’s talk to the confederate statue supporters.  I think they believe that taking down the statue is “historic cleansing”.  Maybe it is.  We only have one statue in the county that I know of and it doesn’t represent our whole history.  We do have an incredibly bizarre monument erected to honour the heroes of September 11th.

I believe that this is an opportunity to bring all the people together in the county.  Let’s get the leaders together on all the sides, form an Equity Committee, figure out either a beautiful piece of art to go at the courthouse or a tree or something that represents this loving community that we really live in.  I personally cannot stand down any longer.

It’s hard truths that need to be heard.  It’s not all pretty.  But we owe it to ourselves to finally be a model of what a united, diverse and equitable community can look like.

Stephanie Perry gave a powerful speech and quoted Muhammad Ali:
“Impossible is just a big word thrown around by small men who find it easier to live in the world they’ve been given, than to explore the power they have to change it. Impossible is not a fact. It’s an opinion.

Made me cry.  Please join us.  It will take everyone of us to reverse this trend of systemic, institutionalized, implicit racism and inequity.

Ramen Night at Fair Game! With Little Pond veggies, Lilly Den pork belly and our eggs!!! Great job guys!
Please join us June 15! 5-8pm. Bring your dancing shoes! #thepavingisdone #wedidntloseourminds
You never know who is going to pop out of the bushes at The Plant! 😂 Props to Elise for kicking it on the wedding this weekend! ♥️#ncweddings #notabridezilla #love

Hi there everyone! We are really looking forward to hosting you tomorrow morning @ 10am.
Stories of Grief & Healing
our time to gather in ritual in almost here!
we bereaved are not alone.
Our next Stories of Grief and Healing will be held next Tuesday the 19th - join us🪞🌸
“we call this order of things reality. this is ‘the way things are.’ it’s all we can see because it’s all we’ve ever seen. yet something inside us rejects it. we know instinctively: this is not the intended order of things. this is not how things are meant to be. we know that there is a better, truer, wilder way.” - glennon doyle
Loading Comments...