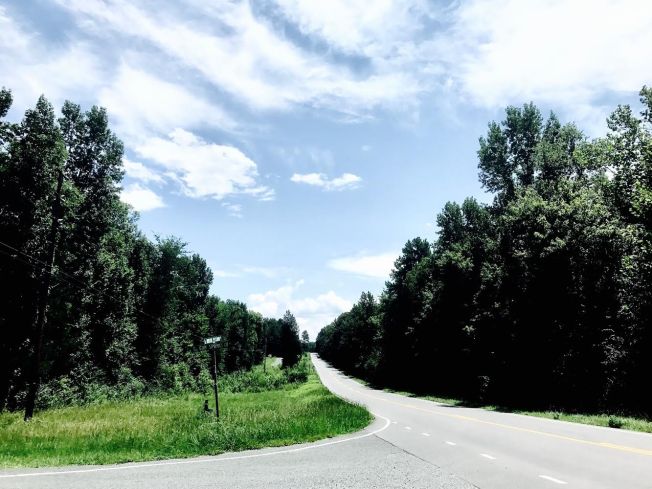 I was driving home Sunday morning from my friend, Melissa’s.  It was a hot steamy day and I passed a bunch of bicyclists struggling up a hill on the moncure road.  They all had on their fancy bicycle clothes and one guy was way behind the group trying to catch up.

Walking towards them on the side of the road was an older black man with his impeccable Sunday church clothes, including a long sleeve purple shirt and a purple tie.  He was limping just a bit.  His face had a look of grief, yet incredible determination as he looked ahead walking with purpose.  There was no church within miles.

Something about that man’s face made me turn around.

I pulled over on the curvy road and asked him if he needed a ride.  He hobbled over and got into my beetle.  He said his ride never showed up today and he needed to get to Homecoming at his church.  I said, let’s get you there, sir.

I dropped him at the church where I always work during election time.  The parking lot was packed for Homecoming.

Larry looked at me and said shyly, I hope it’s not too forward, but can I get your phone number.  It helps to talk.  Loneliness is hard.

spiral꩜healing……is once a month with the New Moon - roughly the third Sunday - for 8 months. It will be a small sharing circle where we will build upon one another’s stories of grief. we will use elementals to alchemize our experience together with seasonal rituals of release.
happy first workday of 2023!
vision board making party
join us tomorrow at the Chatham Community Library December 10, 2022, for a special event called Death and Cupcakes.
wow, this is what our community looks like when we come together to be curious, wild, and brave
🍄 we have our circling event tonight and you can catch @mamadelamyco as our keynote @ 3pm saturday for our 7th annual Death Faire 🔮🕯
Loading Comments...