Today I’m in Montgomery, Alabama to see the The National Memorial for Peace and Justice Museum.  I also went to the Rosa Parks museum which had this cool as hell time machine in which you sat on a bus and it took you back to the 1800’s.  It described the history and where the character of Jim Crow came from and exactly why we are where we are. 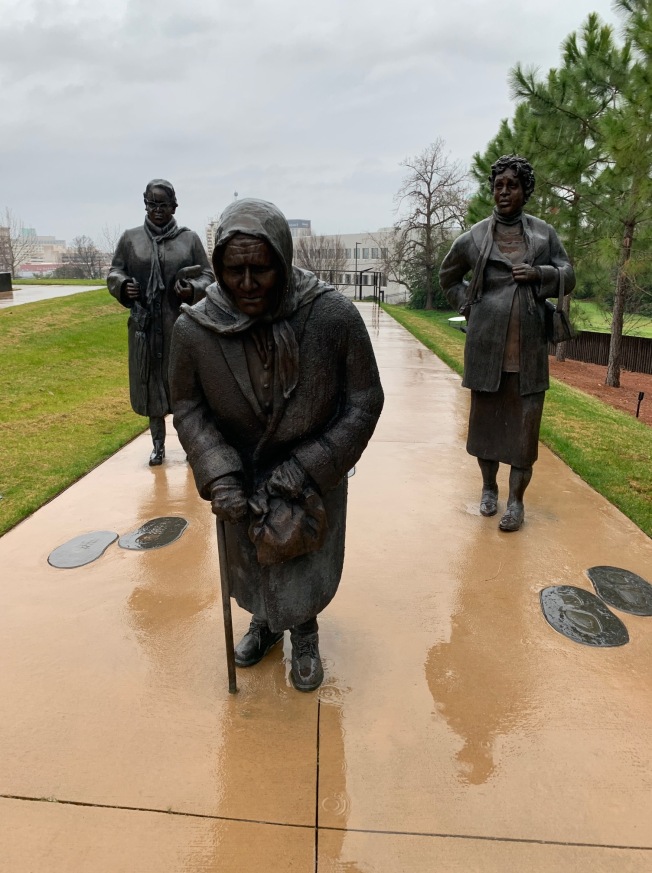 Going to the Peace and Justice Museum was heavy.  I knew it would be and yet I was not prepared for the deep punch as I walked into the memorial.  I didn’t quite get the large rectangle cubes with victim’s names and where they were from as I walked in.  I spoke to a staff person who said they researched 4000 lynched victims and they had to have 2 forms of documentation to put their name on the monuments.  Of course that is a small amount of names as most had no documentation or record.  As you continued through the memorial the rectangles became more and more elevated and then I got the symbolism and it was horrific and well done whomever came up with that design.  It made the point about the terror that has been going on since the 1800’s.   They have no way of figuring out the real numbers of lynchings, but it is just a fraction of what are recorded.

The Equal Justice Initiative is about facing the hard facts and history in order to move on.  They are taking on racial and economic injustice.  They just put out the movie Just Mercy written by the founder, Bryan Stevenson. They have taken on the biggest issue in America.   It is truly horrific to think of what these humans had to deal with, and still have to deal with.  I’m humbled and grateful to learn even more.  I’m also grateful to our ongoing Chatham Social Justice Exchange that prepared me for this.

PEOPLE, EVERYONE SHOULD COME HERE TO UNDERSTAND…no matter what color you are.

I had to go to the Hank Williams museum to blow off some steam next door.  He died at age 30.  He made quite an impact in just that time.

Montgomery has a lot to offer.  As I sat in a beautiful farm to fork restaurant tonight where the staff were mainly of color and the customers were mainly very southern white people.  I couldn’t help but think that we have still not come that far.  I overheard conversations of men discussing political strategies and at the same time, the staff seemed happy and empowered and my bone marrow and Caesar salad was amazing.

I started my 6 week journey by going to Charlotte, NC to see my Aunt Julia and cousins Greg and Eddie.   I had not seen them in about 2 decades.  These cousins were adorable as children, albeit they got in a lot of trouble…2 boys and I very much looked up to them.  Fast forward to 2020 and they have two beautiful wives.  Teri is doing amazing work with textiles and also works closely with the homeless population of Charlotte.   (They call her the everyday hero) It was really fun seeing them and I brought them a bottle of Fair Game brandy.  I hope I get to see them again sooner than 2040.

Onward to Atlanta, GA.  I drove in at sunset to that dramatic skyline and came into Vanessa and Doc’s place.  They threw me a party and it was an incredible evening of connecting with Maurice Small and his family and women that I had never met but, will all be coming up to NC soon I’m sure.  They put on a spread of food and drink and we exchanged stories.  One woman was losing her beloved husband to ALS and I could relate because of my neighbor Chris.  We had a raucous evening. When I told them that I was driving across the country they all paused.  Vanessa’s dog, Caesar slept by my side that night.

We headed to Vanessa’s country cabin in the town that Alice Walker is from (Eatonton, GA)  and took a hike by the creek.  Visiting with Vanessa is always incredibly healing.  She is a soul doula and it was perfect to start the sabbatical with this intuitive woman that calls it as it is.  Vanessa has a way of distilling things down and then she makes a potion to make it all work.  I left with 3 potions and a mini cauldron for the trip to burn some sage and bay.  Not to mention her words of wisdom that literally will change my trajectory.  Vanessa only made me cry a couple of times. She has an infectious laugh and energy.  Her mate Doc is super supportive too.   I brought a few of the fresh off the press Hempsmith beanies for them. 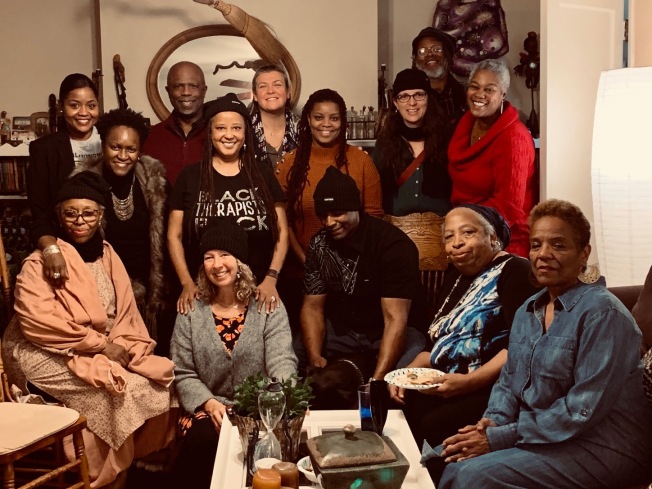 A very special urban farm tour was with Maurice Small.  Maurice has been a speaker at Abundance’s climate change conference and has a special place in my heart.  He relocated with his family to Atlanta and is leading the Atlanta Urban Food Forest.  Maurice is serious magic with plants and kids.  He understands the importance of teaching the next generation and they actually listen to him, because he is cool as hell!  I believe he can take discouraged kids and teach the beauty of dirt and plants and solve climate change along with food insecurity.

Bonus was getting to see Jaime at her place of work.  A renovation of a Sears and Roebuck factory into a multi use project of retail, food and beverage and living and co-working space.  So cool to see this as we are embarking on The Plant and Chatham Beverage District in PBO.  Jaime was an early employee of Abundance NC and one of the smartest and most energetic women I know.  Next was my bff from 2nd grade Melissa who just so happened to be working in Atlanta.  We are basically sisters and it was so fun to connect for dinner.

I’m off to visit Kaitlin, my step-daughter in Louisville, KY next.  Can’t wait.

This sabbatical is exactly what is needed.  Magical in fact.  Every person I meet seems to offer
insights to the next step.

spiral꩜healing……is once a month with the New Moon - roughly the third Sunday - for 8 months. It will be a small sharing circle where we will build upon one another’s stories of grief. we will use elementals to alchemize our experience together with seasonal rituals of release.
happy first workday of 2023!
vision board making party
join us tomorrow at the Chatham Community Library December 10, 2022, for a special event called Death and Cupcakes.
wow, this is what our community looks like when we come together to be curious, wild, and brave
🍄 we have our circling event tonight and you can catch @mamadelamyco as our keynote @ 3pm saturday for our 7th annual Death Faire 🔮🕯
Loading Comments...
%d bloggers like this: