The first time I met Barbara Lorie, I was knee deep in mud and many years of someone else’s trash; meds, mattresses, bottles and cans.  I was cleaning up around the tar paper shack that would soon become my home of 20 years.

She took one look at me and told Lyle that I was a Princess.  So, we didn’t get along very well for awhile.

Barbara was a force to be reckoned with and she met Lyle and our roommate, Jenna at a Thomas Berry workshop.  Barbara lived in Pittsboro and was thinking of starting an intentional community.  There was talk of the intentional community being right where I was cleaning up the most nasty crap from the former owners.

I don’t know when I fell in love with her, but it was a slow build.  I wasn’t used to someone who spoke her mind and was so opinionated. I do know that when she spoke, people listened.  After we came home from the hospital with Zafer, she sent the word out in the community that this young couple needed food and the food kept coming.  Some people we had never met.  We finally had to say that we were capable of cooking and the lasagnas stopped coming. 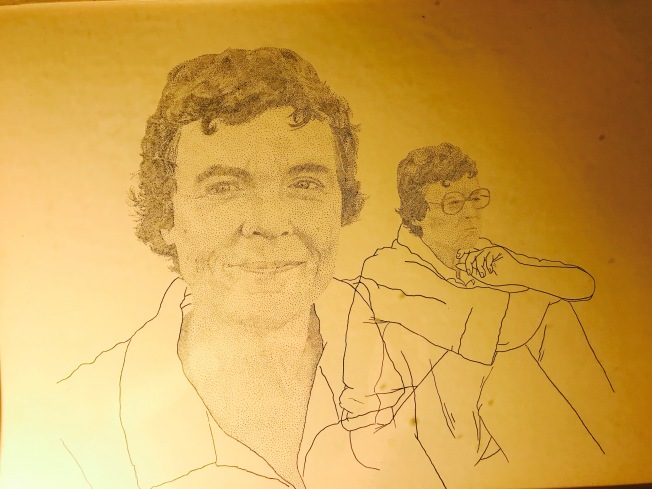 Less than two years later, when Arlo surprised us and the delivery didn’t go that well, my uterus and other organs ruptured.  I was bedridden for weeks with a catheter and a newborn.  Zafer was not happy about the situation and Lyle was juggling keeping it all together plus building us a pond because it was so damn hot in the house.

Barbara came over every day and cared for me and Arlo.  She managed the guests and turned people away so I could rest.  She would have them drop their food and gifts and tell them to leave.  I have never felt so protected, even if I did want to see those people!  Barbara took me to the hospital for follow up procedures and would yell at the doctors and the nurses about the care I was getting.  They asked if she was my mother.  I said my mother would never speak like that!  Once again, I got excellent service. 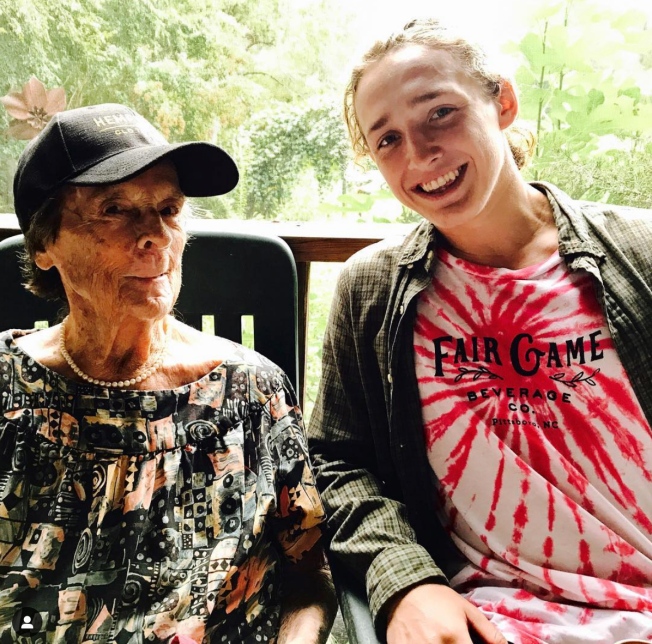 Over the years, Barbara was a grandmother to the boys and girls, she taught Jessalyn to drive stick shift, she could keep up with Kaitlin, she certainly taught all the kids the alphabet of curse words.  Barbara and Uncle Mark were incredibly close and for her 80th birthday party Mark and I broke into her house and stole her photo albums and pictures off the walls to make a movie about her.  Doug and Yvonne kept her away for an entire day so we could scan everything.

Barbara would even go visit Lyle’s parents in Canada. The contrast was big.  But they all had a love and respect of one another.  Her intellect and political knowledge could not be beat.

One year she gave me a huge stack of papers to take to the beach.  It was her memoirs.  I thought there is no way I was going to read through them.  I couldn’t put it down.  Her memoirs were wild and a page turner.  Barbara has lived an incredible life of adventure, love and pain.

Another year, Barbara’s spirit was down.  Her body was not delivering.  She wanted to go.  One thing on her bucket list was to go to Mattamuskeet to see the migration one more time.  We made a date to go down and stay in a B&B.  Her stories can keep you spellbound for hours.  We dropped in on my friend, Alisa and met her family and husband Chris.  Alisa joined us the next day at the lake to see the birds and we learned about her hunch that her husband had ALS.  Well, Barbara said on the way home, we must get that family to Chatham County to help her and to see Chris out.  And that is what happened.  A very long story on it’s own.

When Zafer died, it was like she lost her own blood.  She is one of the few people that I could fall apart with.  I remember one day when the autopsy report was emailed to me and I had to read about the tag on Zafer’s beautiful toe.  I read about every part of his body externally and internally and I drove straight to Barbara’s and freaked the hell out on her.  She could handle it and she could listen fully.

Barbara would adamantly give advice.  After listening to my drama du jour, she would say:  Go check yourself into a mental institution right now.  And she would give me the number to call.  And she was always right.  I never did check in, but I should have.

She told me when my skirts were too short, when I hadn’t handled something well, when I was not taking care of myself, and she also gave me tons of praise.  She told me how I was changing the world with my work at Abundance.  She encouraged me and sometimes gave me that extra bit of courage to keep going. 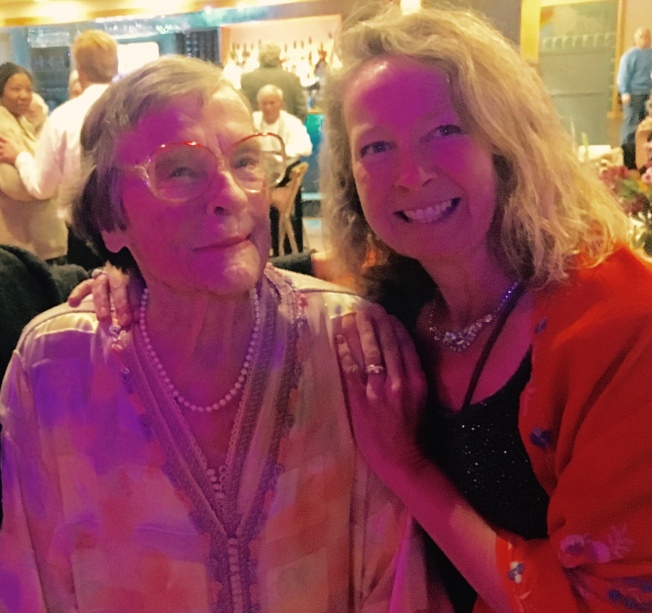 One day Barbara called me so excited.  She had just read “Proof of Heaven; a neurosurgeon’s near death experience”.  She said I MUST read it right now.  In her 90 some years this really spoke to her and she knew that she would see Zafer soon and this was just a transition.  It made her so happy and therefore it made me so happy about her seeing Zafer on the other side.  We laughed about the two of them having lattes together as soon as she got there.  That phone call and the fact that this 90 year old believed this got me through some tough months of grieving.

As Barbara’s body started giving out, we would come up with foods that she wanted.  I wanted to be able to make her whatever she wanted.  The first exotic dish she asked for was duck.  It took me months to get a minute to bake her a duck and the night I scheduled it, Doug had to take her to the hospital.  I thought, shit…I have to get her this duck before she dies.  Well, she didn’t want just any duck, she wanted the Asian market duck where they have it precooked and cut it for you.  So, I went and got the second duck and we had a successful dinner party last fall.
I realized it wasn’t about her having the duck, she wanted me to have that crazy experience of the Asian market.

Standing rib roast was the next dish.  Tony was in town and I went and bought a 4 rib standing rib roast.  It was bigger than a fat baby.  She didn’t trust me with that, so she ended up cooking it and we had another amazing dinner party.

A few weeks ago as she weakened, I came by and she was sleeping.  She opened her eyes and told me my dress was too short.  I asked her what dish she wanted next and she said “lobster”.

It has been refreshing to talk bluntly with her about death and what she wants.  She built this community to see her out.  And we are.  Her legacy is Blue Heron and the sweet community that is giving her 24/7 care right now.  So many people are helping Doug and Yvonne:  Davo, Stacye, Elaine, Sally, Jean, Sue and the list goes on.  Barbara has vision and she created this.  She is a woman that knows what she wants.

I know that soon she’ll be somewhere really fun, being extravagant, with Zafer and Mark and all the other soul families.

A motley crew for xmas….wouldn’t have it any other way! Wishing the world a merry holiday!
When you combine a caravan of comedians with a convocation of campers and a pride of women in one weekend! Whew! Ecstatic weekend. #circlecitypbo #raggedy_rob #theplantnc #bmcbrewing #littlepondfarm
A very happy Thanksgiving at Rocking Horse Farm!

The mysterious fruiting bodies that pop up as if from nowhere. These seemingly rootless gifts are fed by the network of mycelia beneath our feet that stretch for miles with no marked beginning or end. A representation of life’s interconnectedness and the healing powers of a deeply connected community.
Flowing with this winter season.. self reflection, rest and dreaming about new beginnings❄️
Winter Solstice Reflections🌬
The 6th annual Death Faire… 💀
tomorrow… 🔮💀🪞
The veil is thinning… our spirits are near. We are just 3 days away from our 6th annual Death Faire. tix are found in our bio. 💀🔮🪞
Loading Comments...
%d bloggers like this: